This is how traders benefit from the reporting season

The reporting season is the time when stocks may experience greater price fluctuations when expectations are exceeded or disappointed. But how can traders benefit from this volatility? How does one actively trade quarterly figures?

The following two examples are intended to provide answers to these questions and illustrate how to use this stock market phase for one’s portfolio.

Active traders want one thing above all else: Volatility. And it particularly occurs during the reporting season. It’s when quarterly figures and company outlooks provide impetus for the coming weeks and months. This often immediately leads to stronger price movements and frequently also to reversals in trend. For example, numbers that are better than expected can form the basis for a new uptrend - even for stocks that were previously caught in a sideways market phase or lethargy for weeks or months.

Even more important than the quarterly figures, however, is often the outlook for the current year or new medium-term forecasts (two to five years). If there are positive surprises here, a veritable fireworks display of prices can develop, especially if the stock has previously barely gone up.

What is important with regard to the numbers

Traders should pay special attention to an increase in sales, EBIT or margin forecast. If one or more of these key figures are revised upwards, it is not unusual for the price to record double-digit growth and to rise over weeks and months - especially as analysts tend to subsequently raise their estimates. Correspondingly, large funds gradually buy more stocks and drive the price.

How the implementation works in practice

So how can traders benefit from the reporting season’s impetus? Most companies report the quarterly figures and outlooks before the stock market opening between 7:00 and 7:30 am. An overview of when which company reports numbers can be found, for example, at finanzen.net. In order to be able to categorize the reported numbers correctly, the paid DPA (DPA-AFX ProFeed) news ticker, which is integrated in a large number of brokerage and trading platforms, is particularly recommended. The current estimates of analysts are always given there as well. But there are also free providers such as Guidants or FinanzNachrichten.de.

In the case of Pfeiffer Vacuum and Sartorius, for example, this strategy worked perfectly.

Pfeiffer Vacuum reported its figures on May 3 before official hours, shortly before 7:30 am. The forecasts for sales and EBIT were substantially exceeded. In addition, management is optimistic for the year as a whole.

The stock had not yet factored in the good operating trend in the price. It tended to go down for weeks and months, with the price ultimately having stabilized at 120 euros. This led to an upwards gap (price gap) at 9 am. This is not uncommon with numbers well above forecasts and should not be a reason not to buy with this strategy. In this example trade, one could have bought in at prices just over 130 euros. 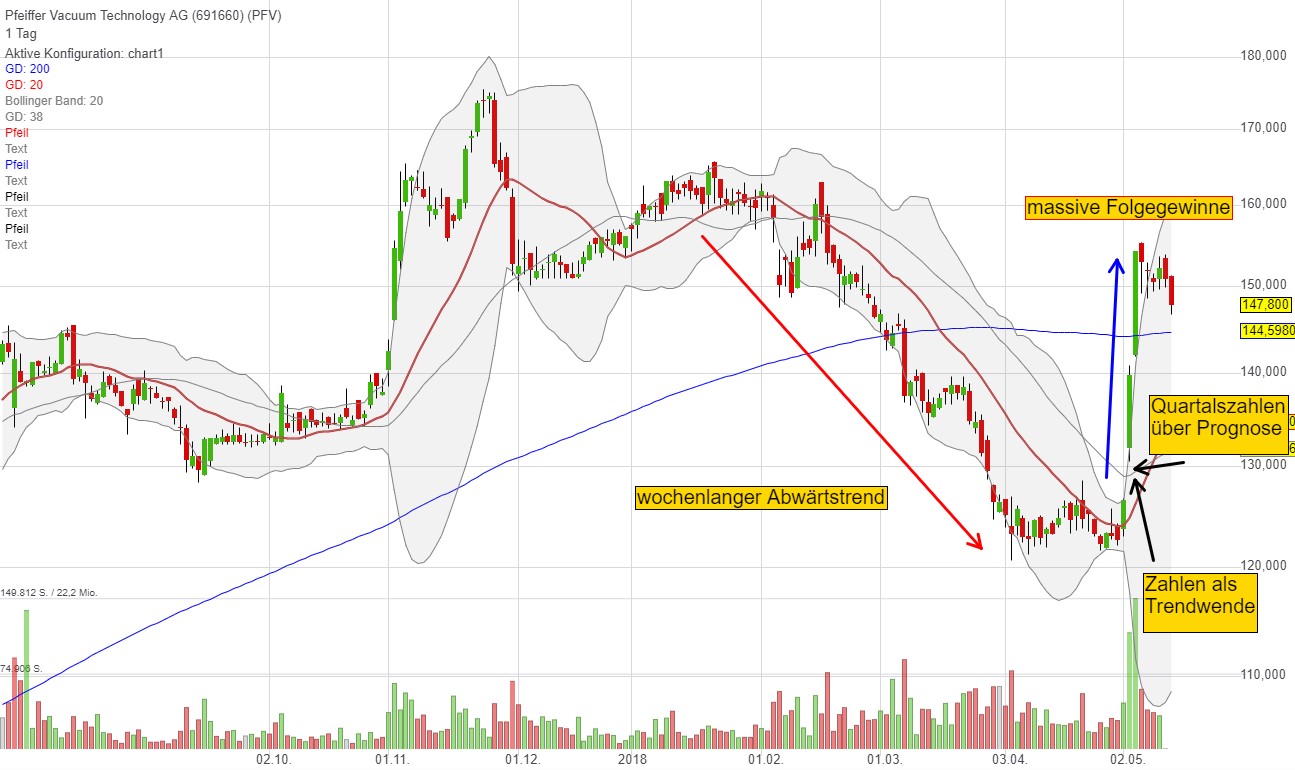 Of course, there is never a guarantee for rising prices, thus traders always need an exit strategy. I always choose the price level before the quarterly figures for a possible loss limitation - in this case, this is about 125 euros. But for me, the stop loss always only applies on a closing price basis, which means I sell if the closing price should fall below my limit. I do not set a stop-loss in the system, because especially after such news, violent price fluctuations take place in some instances and one can thus be knocked out in an unfortunate way. In this case, the scenario came off perfectly and the stock has risen by over 15 percent since the quarterly figures.

Another example is Sartorius. There were two news impulses here. At the end of January, better than expected figures as well as a positive outlook were presented.

The stock was thus able to break out to a new high. That breakout was underpinned by new medium-term goals which analysts did not see coming: On February 21, Sartorius announced its intention to increase its sales to four billion euros by 2025. The margin should even grow to 28 percent.

The stock has since rallied brilliantly. Despite repeated short setbacks, the overall price increase currently amounts to about 40 percent.

Michael Flender is a wikifolio trader and manages the two wikifolios „Goldesel-Investing“ and „Goldesel-Trading“ as „GoldeselTrading“. He comments on financial market-related news and events here and analyzes stocks in which he may also be involved as part of his wikifolios. The text reflects the opinion of the author. wikifolio.com assumes no responsibility for its accuracy. The charts were created with Traderfox.

No further blog entries found for these categories.