5.5 reasons for stocks as retirement provision

Actually, just about every person should be a stockholder. This Friday, the German Stock Exchange is holding its Day of the Stock all across Germany for the fourth time. Reason enough to show that a broadly diversified stock portfolio will yield higher returns in the long run than other forms of investment and savings. In particular against the background of declining pensions and low fixed interest rates, they are an important component of retirement provision.

Correspondingly and contrary to often expressed criticism, stocks are certainly not only for speculators. On the contrary: The stock is first and foremost an interest in a company. Anyone who buys stocks becomes a co-owner, bears the entrepreneurial risk accordingly, but is also entitled to profit sharing in the form of the dividend.

Perhaps the most significant proponent of the stock is Jeremy J. Siegel. Anyone who knows his book “Stocks for the Long Run” will almost inevitably become a long-term bull. According to the finance professor, no other asset class has long-term returns as stable as the stock.

It is true that stock prices sometimes tend to fluctuate quite sharply in the short term at times. For example, in early February, the Dow Jones Index, generally considered the world's most important stock barometer, lost four percent in one day. However, the great excitement among investors and media representatives was unfounded. According to Siegel, such short-term fluctuations in the stock markets, which affect and sometimes even frighten people, are insignificant compared to the direction in which stock prices move in the long term: Upwards.

According to Siegel's calculations, a broadly diversified stock portfolio - not to be confused with individual stocks - have yielded an average real return of 6.6% per annum between 1802 and 2012 (increased value adjusted for inflation). It ultimately did not even matter when one bought in - that is, in the worst case, for example at an all-time high before the next big crisis. The only important thing was that the investment horizon was at least five to ten years.

"Even if stronger corrections are always possible on the current price levels: in the long term, stocks should yield a better return than other forms of investment."
wikifolio-Trader Hans Zenger ("hzenger")

But would that have worked in the last 20 years - despite the bursting of the dot-com bubble at the turn of the millennium, the financial crisis of 2007/2008 and the subsequent euro crisis?

20 years and a couple of ends of the world later

Those who invested one euro in a diversified stock portfolio at the end of 1998, as measured by the MSCI World GDTR Index, achieved an annual average return of 5.5 percent. Inflation would have reduced this increase in value to just under five percent.

This means: One invested stock euro became 2.5 euros in 20 years. In contrast to that, a fixed-term deposit account would only earn an average of about 0.7 percent annually.

The stock's performance is particularly impressive against the background of the first crisis-ridden half of the period under review. For example, in the wake of the bursting of the dot.com bubble, stock markets collapsed by about 40 percent. Within only three years, however, all losses would be compensated again - they even achieved a small increase. Even in the case of the financial crisis, the worst crisis since the Great Depression, it would only have taken a year to make up for the losses.

And in the event that you as an investor would have bought during the high before the respective crises? All in all, you would have had to wait six to seven years in that case in order to break even with the investment again.

Conclusion: If you have an investment horizon of at least five to ten years or more, you do not have to worry about your stock investment. At least this was true for the last 216 years. By the way, the Dax-Rendite-Dreieck of the German Stock Institute reached a similar conclusion for the DAX, Germany’s benchmark index, which consists of 30 stocks.

However, if you neither have the necessary stock exchange experience, nor have the time or nerves to put together your own stock basket, you can get yourself some inspiration from the wikifolio traders, for example. They, too, rely mostly on the strength of the stocks. They by far make up the largest part of the sample portfolio. 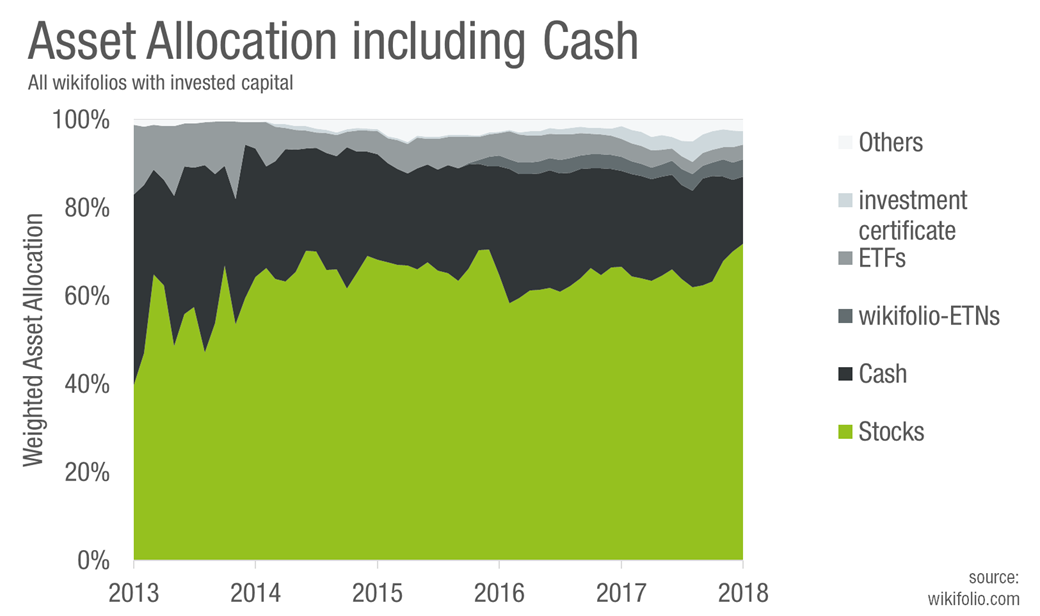 Hans Zenger ("hzenger"), for example, currently only holds stocks in his wikifolio "Deutscher Mittelstand". He does not allow himself to be influenced by the recent turbulences on the stock exchanges: "Even if stronger corrections are always possible on the current price levels: in the long term, stocks should yield a better return than other forms of investment."

For Zenger, the reason why many private investors have had bad experiences with stock investments is mainly of a psychological nature: "The biggest mistake is to quickly sell one’s stocks for fear of further losses. Those who are not psychologically prepared to be able to cope with high price falls without pressing the "sell button" should not invest in stocks. Many investors believe they can reduce their risk by selling after price declines. This is usually a big mistake and results in private investors performing, on average, considerably worse than the overall market."

Excess return with the top traders

Zenger has since proven his good sense for the right stocks: He is among those wikifolio traders who have been able to beat stock markets in the past. Since creating his wikifolio 55 months ago, Zenger has generated an average monthly excess return of 1.3 percentage points compared to the MSCI World GDTR. Other traders were able to beat the market as well, as the graph below shows. 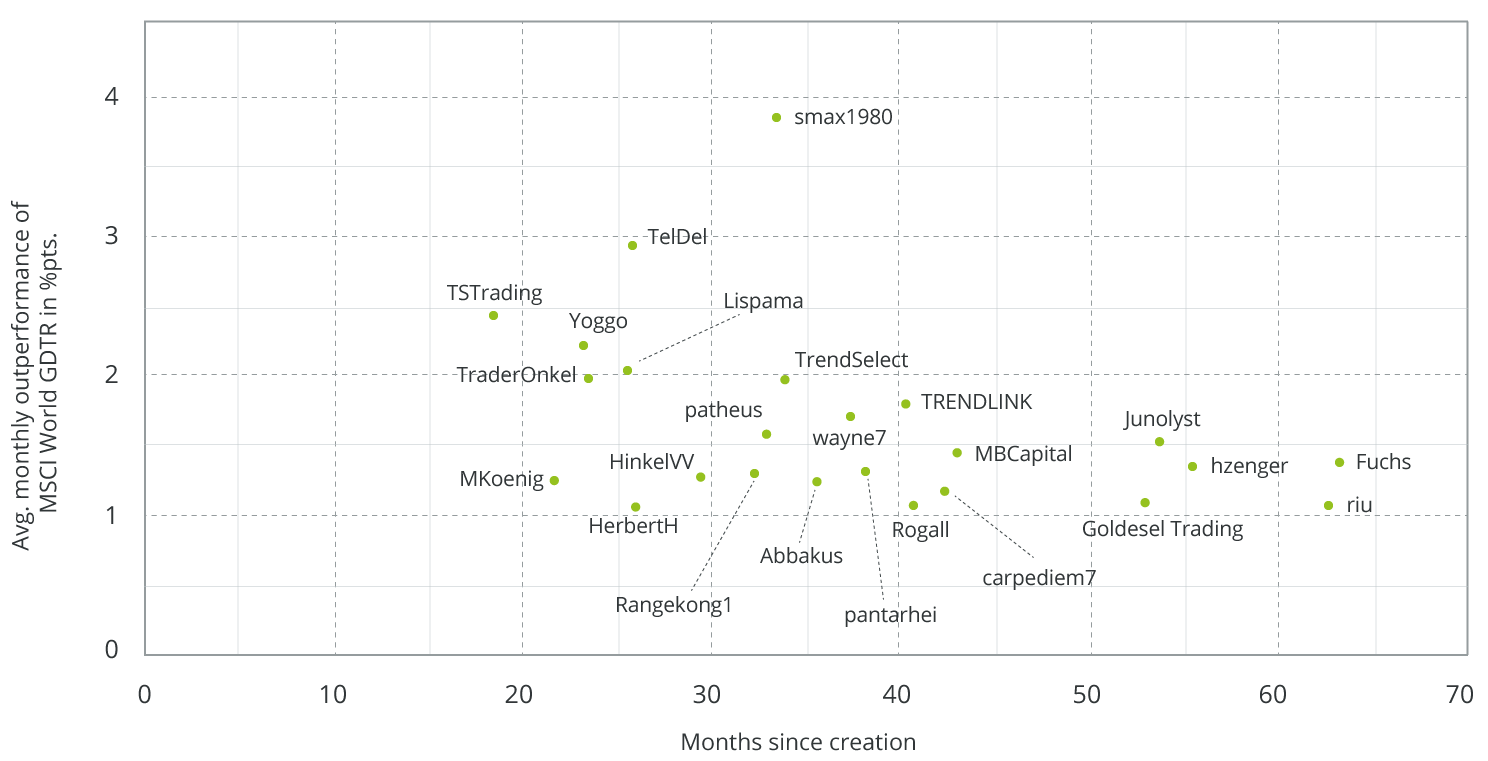 They achieved this with various strategies: Some, such as Michael Flender aka "GoldeselTrading", tend to have a short-term investment horizon, but have so far also responded very flexibly to market turbulences or corrections. Others are more investors in the traditional sense, such as Hans Zenger or Andreas Schratzer aka "Fuchs". His methods are based on those of giants like Warren Buffett.

In line with this, he recently commented the following on the stock exchange fluctuations and his wikifolio "Schnäppchen Jäger": "The fluctuations were due to the nervousness of the market as a whole, coupled with inexperienced investors whose response to all news is activism. In the long term, that has no meaning. " Would Siegel concur?

Do not miss out on anything and see all the details in the wikifolio!
Register now or log in and see all the key figures, the current portfolio and every trade for free.