The Brexit is a fact – this is how the top traders position themselves on wikifolio.com

Already before the vote, the nervousness of market participants was noticeable: The fear of an exit of the United Kingdom from the EU first caused the DAX to fall. In the days preceding the decision, it recovered due to increasing rumors of the British remaining in the EU. But there was still no sign of ahectic rush on the part of the traders on wikifolio.com in the run-up to the vote (more on this in our article “Brexit or Bremain?” from last week).

The British cast their vote, the stock exchanges promptly respond.

In the night from Thursday to Friday, the time had finally come, the votes were counted. The result: With a narrow majority of 52 percent, the British surprisingly voted for an exit from the EU after all. Consequently, the DAX once again fell by ten percent at the start of trading on Friday morning and thus recorded the largest slide in prices since 2008. The EuroStoxx 50 was at minus nine percent as well, the British Pound lost eleven percent in value.

How did the wikifolio traders fare in spite of the crash? How are they positioned after the decision of the British in favor of the “Brexit”?

In terms of figures, the consequences of the decision are as follows for the stock exchange:
anyone who placed their bet on the DAX the day before the result had to face a decline of 7.2 percent on the following day. In comparison, our Real Money Traders can practically shine with more than one million of invested capital in the corresponding wikifolio certificate – they only post a decline of 0.6 percent on average. 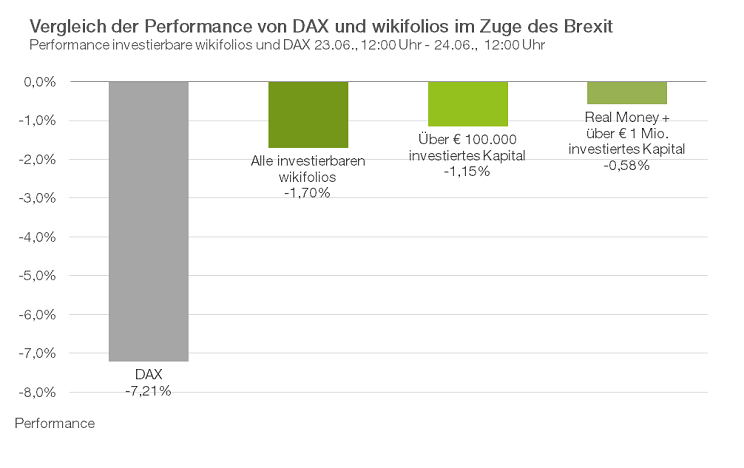 The average loss of all investable wikifolios is 1.7 percent and thus also always far better than that of the DAX. Here too, investors have shown the right touch on average – the more popular wikifolios with more than 100,000 euros of invested capital in the corresponding certificates lie at –1.2 percent on average in fact.

Cash versus drawdown
Joachim Köngeter “Joibaer” is represented with two of his trading ideas in the top 5. The wikifolio "Tradingchancen deutsche Aktien" ranks number 1, the wikifolio "Tradingchancen dt. Nebenwerte" ranks number 5. Both wikifolios have their focus on German stocks, and Köngeter holds a relatively high cash proportion of about 60 percent in both. He also currently hedges low weighted short ETFs on the DAX. The wikifolio trader does not particularly enjoy the current situation: “These political stock exchanges are a horror to me – these circumstances are totally unsuitable for the chart technical trading of individual stocks the way I like it. I look forward to the moment when peace will be restored and the stocks are able lead their own life again.”

Active diversification
Ranking in second place with his wikifolio “DACH-Trading&Invest”, Sascha Gebhart “nickleeson79” gave the following warning on Friday morning after the crash: “We have stocks, no derivatives or other infernal stuff and widely spread, along with 2/3 cash. Just don’t stop thinking logically now and don’t become emotional. Panic and greed do not make good advisors.” Gebhart has a broadly diversified wikifolio in which he focuses on stocks and mainly trades in German securities. He trades on an almost daily basis, generates many trading ideas and keeps the risk within limits through manageable position sizes.

Focus on the US market
The wikifolio “Stock Picker and Cash” of the asset management company MS Finance Support ranks in third place. Manfred Stiegel is taking the Brexit decision calmly: “The Brexit has arrived!! Who would have expected that. But our investments are primarily in America. US futures minus 4.3 %, but the US dollar at plus 2.5%. In other words, although minus, not nearly as dramatic as the overall markets. Let’s stay calm and operate on a day-by-day basis.” Stiegel had oriented his portfolio step by step to the American market ahead of time – which so far has been spared by the Brexit panic for the most part. 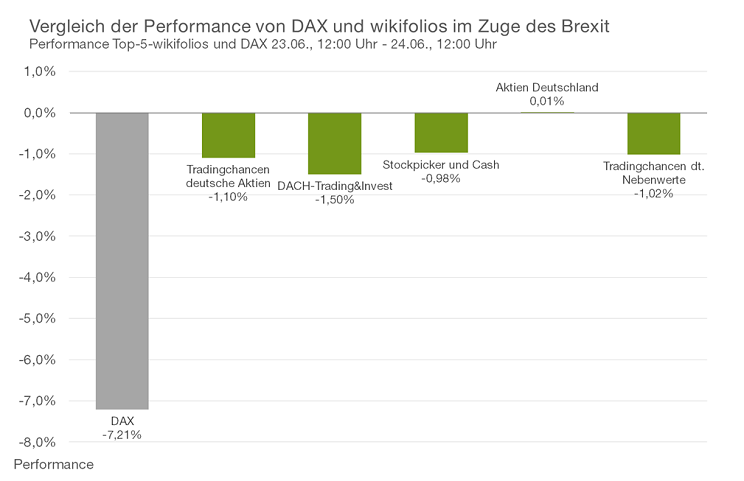 The wikifolio traders set a good example: losses on financial markets can be limited through patience, experience and the “right mix”. The different methods and approaches are widely varied, but keeping a “cool head” is a basic requirement.